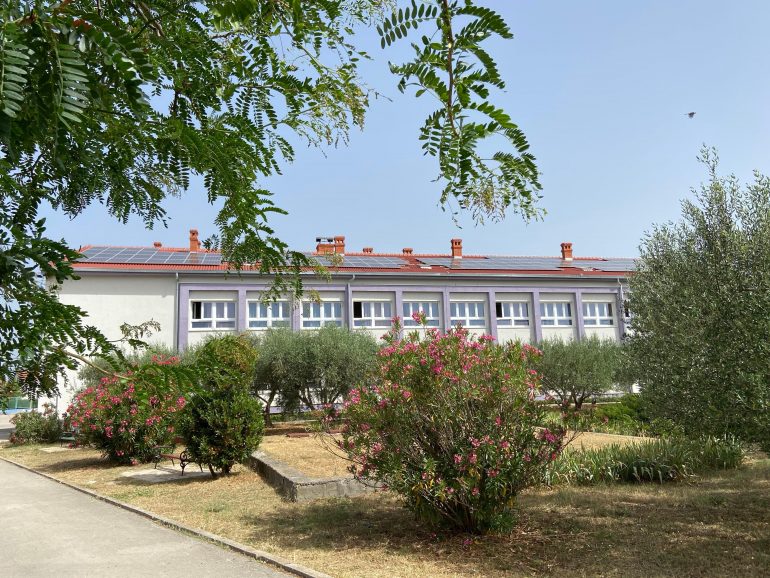 It took three years between the formulation of the idea and the reality. Students, parents and the school leadership wanted to overcome once and for all the traumas inflicted by the Balkan War by transforming their dilapi dated building into an example from which the world can learn.

Their project proposal received in 2018 the Sustainability Prize of the Emirate-based Foundation honoring Sheikh Zayed, the Founder of the United Arab Emirates. The $100,000 award money kickstarted a revolutionary transformation that mobilized a total of €700,000 thanks to additional support from the Zadar County and the European Union.

Now a 30 kW solar power plant supplies electricity for LED lighting and solar backpacks can be used by students on field trips. An ultrafast, super-secure and energy saving internet operates on light (LiFi), the first in Croatia and one of the first in Europe. An electric vehicle powered by the solar provides for all transport needs for the school, especially the kitchen. When the school is closed for weekends and holidays then all power is distributed to the local community.

Students are now proud of their school, an infrastructure that was first built in 1876. They wish to create a portfolio of new businesses, securing a future for their community that already harbors the largest organic olive orchard in Croatia. They do not wait to take initiative after graduation and created a student cooperative “Maslina” selling olive oil from the school gardens. Now they are ready to convert the 30 kg of clippings per tree into 15 kg of mushrooms generating more income and job opportunities.  “We want to have a future right here at home” commented Leonarda Skara who went to Abu Dhabi to collect the Prize and who is leading the students in their enthused transformation of the war torn region.

The success story of the Vladimir Nazor Elementary and Middle School in Škabrnja will serve as an inspiration for all village schools around the world demonstrating that a new future is possible even when the dramas of the past are hard to accept nor forget. A video documenting this transformation will be translated into five UN languages and will be distributed through a video and text to the global network of Zayed Sustainability Prize schools.

”The Ministry of Science and Education is happy that the students and employees of the Vladimir Nazor Elementary School, from the small Zadar municipality of Škabrnja, demonstrated their resolve to embrace the future”, said Vesna Šerepac, Director of Education at the Ministry of Science and Education. The inauguration ceremony was attended by Prof. Gunter Pauli, known as “The Steve Jobs of Sustainability” representing The Zayed Sustainabilty Prize where he serves as a member of the committee; the Prefect of Zadar County Božidar Longin; Prof Ivan Šimuni Head of Education for Zadar county; and Darko Parić CARNET Public Administration co operation advisor.