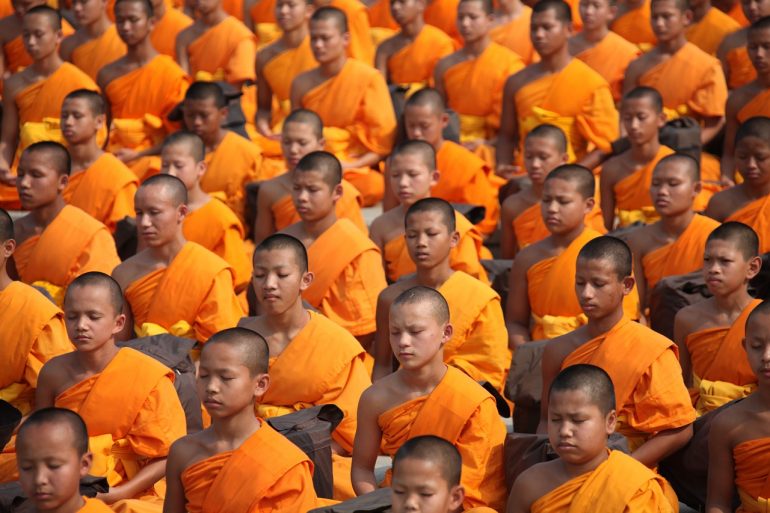 Our approach to the WEEC Congress in Bangkok continues with a taste of one of the main components of Thai culture and tradition: religion, or – better to say – the various forms of religious belief. There is a composite reality. Even if more than 90 percent declare themselves “Buddhist Theravada“, there are still residues of the previous cults in the various regions that make up the State which, with the Thais of the Muslim and Catholic religion (just over 6 per cent) go to compose a reality that often mixes religious and civil practices.

The “Theravada tradition” is a form of Buddhism that has its origins in the island of Sri Lanka and is also present in India, Myanmar, Laos, Cambodia and in some southern parts of China and in southern Viet Nam.
In this variant of Buddhism  is central the figure of the monks, called shanga, present mainly in and near the “vat“, their temples-monastery. They are recognizable by their yellow or orange saris and by their very short hair, sometimes with a completely shaved head. They cannot have beards (and hair) of any kind and their life is marked by times and rituals typical of a religion closely linked to the environment, to the cycles of the stars, the moon, the sun and, above all to agriculture and to the breeding. The shanga enjoy special attention from the faithful and continually receive gifts (especially food, clothes, amulets) that are part of what is “offered” in the vat to the Buddha and his dignitaries. Gifts that are part of classical Buddhist rituals, given that on the basis of them one will be judged at the time of the “passage” (a better life). This type of Buddhism contemplates the “reincarnation” of the soul either in another body or in beings considered inferior (from monkeys down to snakes and scorpions). It is a particularly felt presence in the countryside, less visible in the cities, even though Bangkok alone has 120 vats scattered in various districts.

The periods of phansa that young people face for about three months are still fairly respected, even if not as in the past, refining in this way the methods of meditation and the “personal purification“, precisely the phansa. The prevailing Thai religion (the “Theravada”) has incorporated the beliefs, habits and practices of previous religions (including those ancestral choruses that date back thousands of years). He drew heavily on the Hindu religious universe and reached a particular synthesis. An example of this syncretism lies precisely in the theory of metempsychosis as in the high number of local deities or in the tendency to mix religion and state management. Even the god Brahma has his vat dedicated to him, near the central Erawan Hotel in Bangkok.
Another characteristic of “Thai” Buddhism is that of fragmentation in hundreds of variants: from the more formal and orthodox to those that connect parts of the Gospel to the Buddhist creed or – even – of the Koran, thus creating a bridge – in fact – with Christianity and with the most visionary Islam. Other practitioners draw their religious inspiration from the figure of Buddhadasa Bhikku (1906 – 1993), a Buddhist monk who has based his social action on helping the poorest and overcoming ideological and religious fences. And, in this case, their form of “theravada” finds a particular declination in the adjective “bhikku”.

The Islamic community (about 4 percent of the entire population) is concentrated in the peninsular and coastal area of ​​the south. The group of Christians, both Catholic and Protestant, do not exceed one percent overall, is concentrated in the cities or areas of particular commercial activity. The Christian schools (Protestant or Catholic) with thousands of students very often of Buddhist or Muslim families are highly quoted. And these are found almost everywhere, well seen by the state and local communities.

The dominant religious form, that of the “theravada” variant of Buddhism, allows the royal family to be “the representation of equilibrium (defined “kharma”) between heaven and earth, between men and animals and which provides a “dharma” ( a form of “political actualization”) direct emanation of the sovereign, with consequent prescriptions and instructions on work, family, social organization. Clear traces of multiple overlaps and intersections are found in the complex rituality linked to the “passage” ceremonies.
Those of puberty and the accompanying of the deceased in the “transit” towards another life are fundamental.
Finally, marriage ceremonies are very complex and varied and follow canons and “kinship systems” codified over the centuries. In the latter case it is essential to strengthen the tribe / group of origin by broadening contacts with neighboring realities and there is nothing better than the celebration of one or more marriages, usually combined. Often, for example, brothers of a tribe get married with sisters from another tribe or widows are acquired, since polygamy is not a punishable offense. Or you get to “marriages of alliance” with the stipulation of a treaty of friendship between two realities that are more or less distant.

With Hinduism there are many similarities not only in terminology (kharma and dharma) but, above all, in the clear distinction of social functions, distinct by gender, wealth and tribal belonging, “fences” comparable to those existing in the Indian society based on castes. A modality, in the long run, no longer bearable and confined to the minority of Indian origin or of the former Burma, now Myanmar.

Thai fishermen, in view of the special attention paid to the “Theravada” Buddhism environment, often thank the gods for exceptional catches and never miss a “small altar” of ancestors on boats. Another sign of how strong the spiritualism of origin remained. Many fountains, waterfalls, forests and mountains are considered sacred and inhabited by characters of Buddhist religious mythology (mixed with gods and goddesses of the Hindu pantheon) or, even, with names that refer to the prehistoric populations who lived in these areas in periods prior to the invasions thai.

Above all a spirituality tending to purification and personal improvement before the public commitment. A further confirmation of the multiformity and sensitivity of the Thai people.