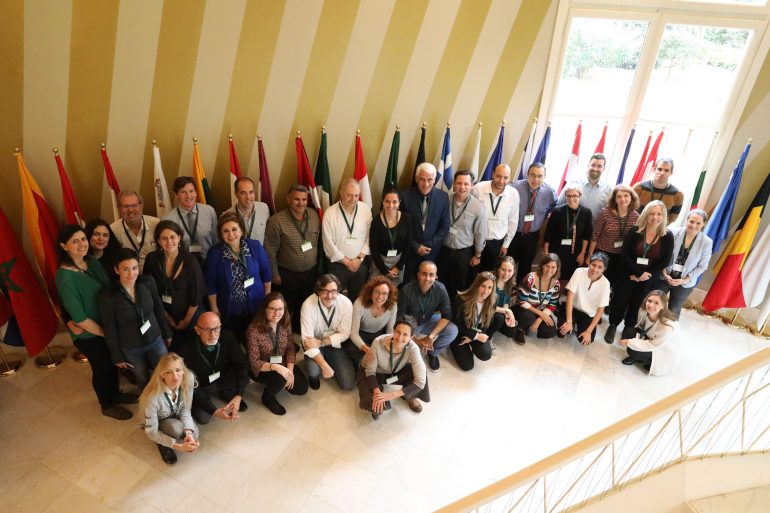 Two days and five sessions of work were held with scientists and journalists to discuss the energy transition of the Mediterranean region, the circular economy and combatting plastic pollution. The program has been completed with two sessions dedicated to initiatives and tools for the journalistic profession, and to debating and exchanging experiences between professionals.
Around 50 environmental journalists and scientists from 20 countries in the Mediterranean basin, researchers, experts, NGOs, and international institutions attended the 3rd Meeting of Environmental Journalists of Mediterranean News Agencies, held at the UfM headquarters, in Barcelona, Spain (13th and 14th Novamber).
The event has been promoted by the Union for the Mediterranean (UfM) and the International Union for the Conservation of Nature (IUCN), in collaboration with the Alliance of Mediterranean News Agencies (AMAN) and EFEverde of the EFE Agency.

As part of the activities, journalists, scientists and experts paid a visit to the Switchmed Connect’s exhibition on “The Circular Economy in the Mediterranean region”. The exhibition showcased impactful stories from the SwitchMed programme, an initiative that supports and connects stakeholders to scale-up social and eco innovations in the Mediterranean.

“Our ocean plays such a critical role in our economy, and the Mediterranean is both a tourism and conservation hotspot filled with rich biodiversity. We cannot afford to continue turning our ocean into a vast, contaminated plastic soup”, highlighted Antonio Troya, director of the IUCN Centre for Mediterranean Cooperation.

“The Mediterranean is one of the most vulnerable regions in the world to the effects of climate change and environmental degradation. Promoting a collective response from the countries of the region to these challenges is at the heart of the Union for the Mediterranean’s mandate”, said Jorge Borrego, UfM Senior Deputy Secretary-General for Energy and Climate Action. George Penintaex, Secretary General of the Alliance of Mediterranean News Agencies (AMAN) and Arturo Larena, Director of EFE Verde at the EFE News Agency, also addressed the audience at the opening session.

The leit motiv across all the work sessions was that of plastics and microplastics in the sea, the tip of an iceberg that everyone sees and whose consequences are easily understood even by the general public.

The challenge of the energy transition, focusing on the role of renewable resources and energy efficiency, also for its social consequences, was the theme of the first and second round table discussions. Among the best practices presented: the Plastic Buster project that analyzes how waste affects marine life, the film A plastic Ocean. On the subject of microplastics Marie-Aude Sevin, IUCN expert on the marine program dedicated to plastics presented the site marplasticcs.org in which are gathered resources, best practices, events and other useful information on the topic of microplastics. Lucile Courtial of the Prince Albert Foundation in Monaco presented Beyond Plastic Med, a network of stakeholders connected with the objective of collecting data and giving concrete and sustainable solutions to the problem of marine pollution.
The meeting was also an opportunity to compare policy-makers, consumers and the plastics industry and to present useful initiatives and tools for disseminators and journalists on the issues of pollution and science. For example, Patrick Wegerdt of the European Commission DG Environment pointed out that we are moving towards a 100% recyclable plastic and that 50% of waste at sea is made up of disposable plastic objects. The video “Are you eating plastic for dinner?” can be an interesting example of how plastic negatively affects our lives and our health. How to build a society without plastic? From this provocative question Jesus Iglesisas (Ecopreneurs for the Climate) started to explain how the problem of plastic is above all social “the alternatives exist – he said – but we must start from a radical change of habits” in which the key words are inclusion, cooperation, sustainability. The climateinnovation.city site presents events, actors and workers in this direction.

This initiative wants to establish a network of communicators and journalists,  a meeting point where to exchange opinions and discussions. In addition, this event facilitates direct access to important sources of environmental information in both scientific and political areas, as well as aspects of management.

The two previous meetings in Málaga (2015) and Marrakech (2016) enabled the consolidation of this network of communicators, and resulted in several important outcomes including; the publication titled “A journalist’s guide on environmental information”, the launch of the MAP Ecology section as part of the Moroccan News Agency, and the creation of the online platform medgreenjournalism.net to foster networking of environmental journalists across the Mediterranean.