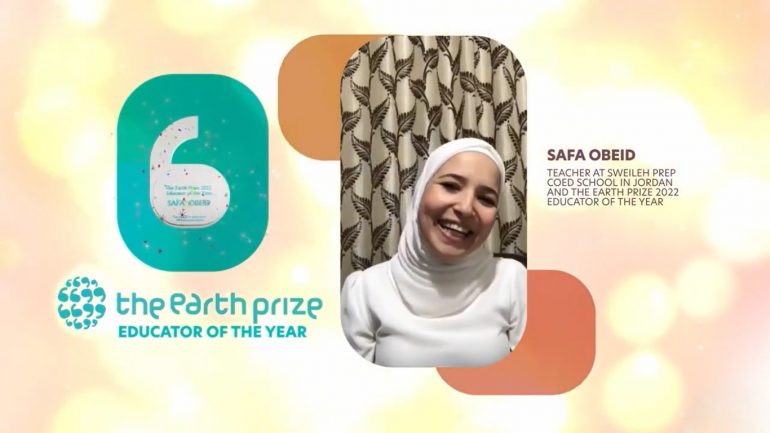 For the World Health Day, UNRWA celebrates Ms. Obeid, named the 2022 Earth Prize Educator of the Year. Ms Obeid, a teacher at the UNRWA Sweileh Preparatory Girls’ School in Jordan, was selected by the WEEC’s Secretary General Professor Mario Salomone.

”This award shows the impact of the professional in-service trainings that UNRWA regularly provides to us.” Ms Obeid Said.

Across its fields of operation, the UNRWA plays a key role in addressing environmental protection issues within the Palestine refugee community and has an obligation to minimize the negative environmental impact of its own operations. In addition, the Agency is prioritizing a range of environmental protection efforts that include for instance the installation of energy saving equipment, such as solar panels, water heaters and LED fittings, in a number of schools, health centres and other installations, as well as safe disposal of medical waste.

Measures to protect water resources and improve environmental health in Palestine refugee camps are also being undertaken including the development of an integrated solid waste management system that will serve all Palestine refugee camps in Lebanon and the installation of solar power systems in 80 schools and six health clinics in Gaza.

The Agency is also exploring current environmental behaviours and teaching practices in its schools and classrooms in order to see how to strengthen and build upon these practices in a coordinated and coherent way. Developing capacity of Palestine refugee youth in the design, manufacture and servicing of renewable energy technology and energy efficiency devices is important for job creation and stimulating the green economy. UNRWA has recently introduced courses on energy efficiency at its vocational training centres in Gaza and will look to expand these to other fields based on lessons learned.

Following the 1948 Arab-Israeli conflict, UNRWA was established by United Nations General Assembly Resolution 302 (IV) of 8 December 1949 to carry out direct relief and works programmes for Palestine refugees. The Agency began operations on 1 May 1950.

In the absence of a solution to the Palestine refugee problem, the General Assembly has repeatedly renewed UNRWA’s mandate, most recently extending it until 30 June 2023

The United Nations Relief and Works Agency for Palestine Refugees (UNRWA) is funded almost entirely by voluntary contributions from UN Member States. UNRWA also receives some funding from the Regular Budget of the United Nations, which is used mostly for international staffing costs.