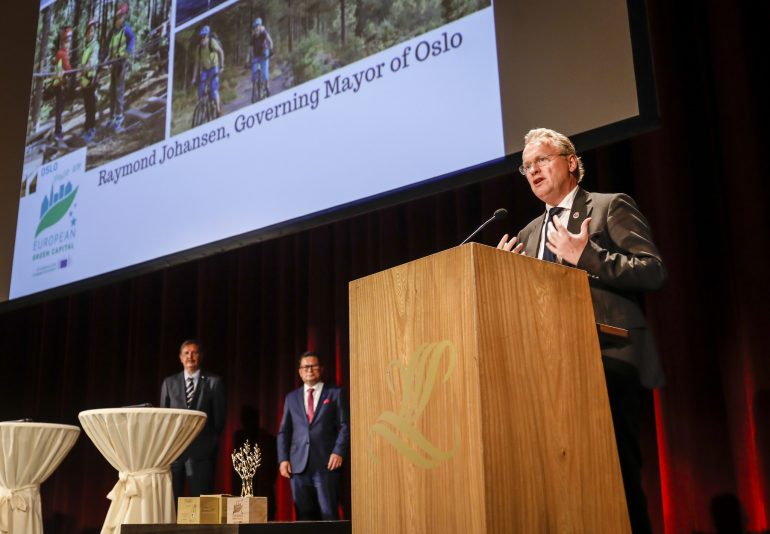 Oslo, the capital city of Norway, won the European Green Capital Award for 2019. The city is surrounded by the Marka Forest, a nationally protected area, and the Oslo Fjord, both connected by a number of waterways.

The city’s waterways have been subject to a new revolutionary strategy which has completely reversed the previous approach of enclosing these channels. They are now being actively re-opened in order to make them accessible for people, to efficiently manage stormwater and facilitate development and restoration of habitat.

Tackling climate change is a high priority for Oslo. The city aims to cut emissions by 50% by 2020 (compared to 1990) and to be carbon neutral by 2050. Oslo has introduced a range of integrated measures to achieve these ambitious targets, for example, by promoting zero emissions transport. The city has become the ‘Electric Vehicle Capital of the World’ with 30% of all vehicles now sold in the city being electric.

Improvements in cycling and public transport infrastructure, the introduction of car free zones, and encouraging the use of electric vehicles, will not only help the city reach its climate goals, it will also greatly reduce air and noise pollution, and enhance the urban environment for its citizens.

Innovation and the promotion of new jobs in the circular economy is a priority for Oslo and the city is at the forefront of circular use of available resources. Biogas produced from bio-waste and city sewage is used to fuel city buses and waste trucks.

Oslo also established the ‘Business for Climate Network’ to foster cooperation between the business community, citizens and NGOs in addressing the impact business operations have on the climate.

In 2016, the city introduced a ‘Climate Budget’, an initiative consisting of 42 separate measures across three sectors: energy and the built environment, transport, and resources. Carbon Dioxide emissions are now being counted in the same way a financial budget would account for funding. The unique ‘Climate Budget’ is one of the main initiatives that the City of Oslo is driving to reach its goal of 50% emissions reduction by 2020.